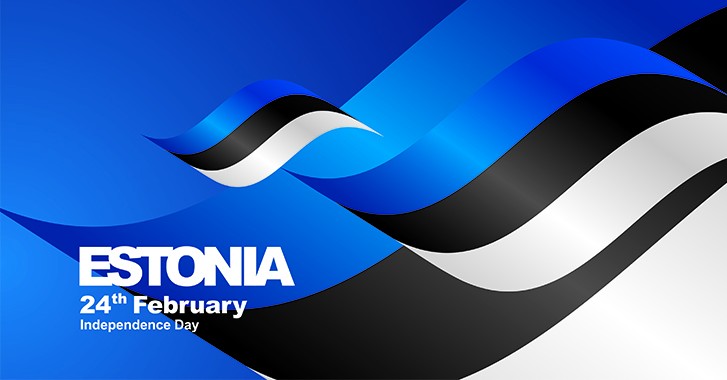 Each year on 24th February Estonia remembers and celebrates its status as an independent European nation.  After WW1 when colonialism ceased to exist, the path towards independent political and national identity became a priority for many countries who had previously been subject to feudal rule going back to the time of Peter the Great in the early years of the Eighteenth Century.  In spite of fifty intervening years of Soviet occupation (1944-91 ) Estonia still marks its independent birth date commencing from the year 1918 when the Tartu Peace treaty was signed between Russia and Estonia.

This year our celebrations began as always with the raising of the national flag on the highest point above sea level in Tallinn called Toompea. It is also the site of the national Parliament and traditionally has a long-serving link going back many centuries with Church life in Estonia.  To the sound of national fervour and song, as well as a short greeting from the speaker of Parliament and the blessing upon this day by the bishop of the Lutheran Church of Estonia, Urmas Viilma, the day proceeded apace with events in many locations across the country which embraces all people in active participation on this day of national thanksgiving.

One of the most important events of our national independence day is the morning worship service, which is attended both by the President of Estonia Kersti Kaljulaid as well as a plethora of government ministers.  There is also active participation on the part of the various clergy who are also members of the Estonian Council of Churches, including our own priest in Estonia, the reverend father Thomas Eriste who also led the congregation in a short prayer for God’s continuing protection of our nation. This year’s music was provided by a mixed choir of singers from various churches in the capital city of Tallinn, including two members of our own CEC St Stephens, Tallinn, Andreas Kivi and Riho Kinksaar and the service itself was televised live throughout the country.  The repertoire for this service was chosen from the forthcoming National Choir festival of Spiritual Music (in the Christian tradition) and lent strong support to our identity as a singing nation. In his sermon of the day, the bishop of Estonia, Urmas Viilma  touched on the problem of tolerance in today’s world, and then gave feedback of schoolchildren’s feelings about problems and difficult situations arising from our contemporary global lifestyle.  One sensed a mature understanding of youth aged between 12-17 who live with problems which have an impact of their lives in spite of their age.   The considered understanding to appreciate life beyond one’s own existence and the need to resist ignorance of helping others in practical ways came across loud and clear in the words of bishop Urmas Viilma.

This service was followed (at Freedom square) by a passing parade of various army divisions (both local and international) serving to keep peace here in Estonia, and it was fitting that our Lord should bless this day with an abundance of sunshine to all who participated in this and other events.