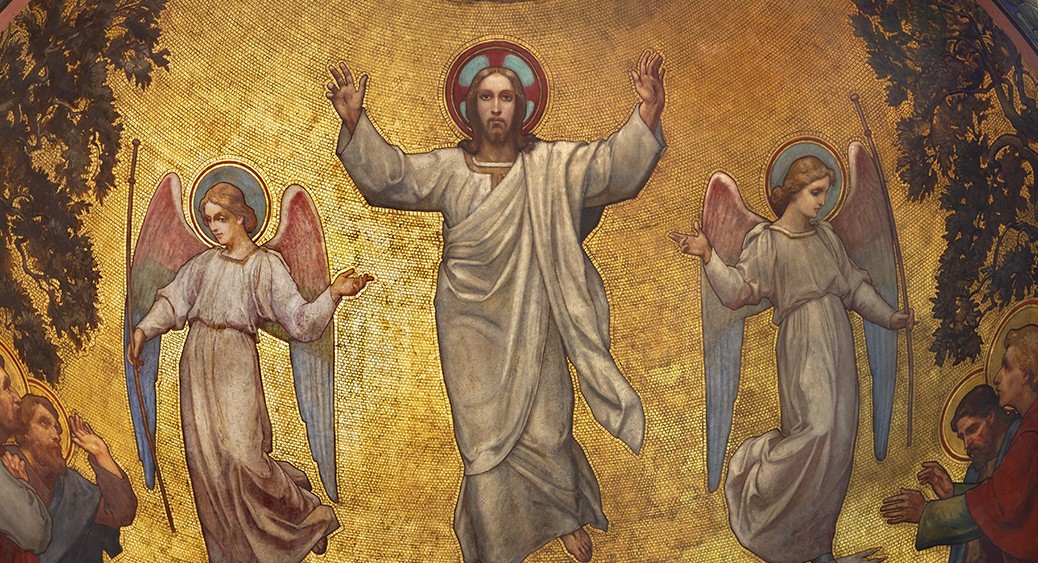 Today is the Feast of the Ascension.  Often it’s not given much importance, but it’s very closely linked with Resurrection.

Imagine the roller coaster ride experienced by the disciples:

The Ascension of Christ

The Ascension of Christ is so important that it’s included in the Creed.  Why did Jesus ascend to the right hand of the Father, and what does it mean for us and for the Church?

Countries with monarchies may be better positioned to understand thrones, dominions, enthronements and related formalities.  David’s kingdom was an example.  In the modern world, different countries have a functional monarchy, a figurehead, or none at all.  Some consider kingdoms a relic of the past, but it may be the closest kind of government to the Biblical model. Prophets in the Old Testament anointed kings: Samuel anointed David.  The turning point in European history was the French Revolution and the subsequent reign of Napoleon: at the coronation he took the crown from the Pope’s hands and placed it on his head himself.  From then on, monarchies began to be replaced by republics.

The Ascension of Christ:

The Ascension of the Church

According to David Chilton’s book, The Days of Vengeance, the “rapture” theory embraced by some contemporary Christians is a misunderstanding of the Christian doctrine of the ascension of the Church.  Chilton describes the ascension in three ways:

1) the definitive ascension, in which we are positionally seated with Christ in the heavenly realms;

2) the progressive, experiential ascension which takes place liturgically every week with Christ in the celebration of the Eucharist;

3) the final, bodily ascension at the end of history.

The ascension has happened, is happening, and will happen.

Let’s elaborate on the second of these.

Sunday is for worship

Sunday is not the last day of the week, but from a Christian perspective the first and most important day when we celebrate the new creation.  Our most important activity on Sunday is worship, expressing and remembering man’s union with God.

Our journey begins from when we awake on a Sunday morning, to the time of preparation, to our going to the place designated by God for us to worship, like Abraham going to the mountain to offer Isaac.  The main reason why God wanted to liberate the children of Israel from slavery in Egypt was to create a nation of worship, which was also a picture of the Church.

When we reach the church, we enter a small room called the narthex, where we dip our finger in the water font and make the sign of the cross, reminding ourselves that entrance into God’s Kingdom is through Baptism.  By the same token, we need to act as those who are leaving the world and entering into a dimension of God’s Kingdom.

The Eucharist: ascending to heaven

Worship begins with the processional, and the Eucharist is its highest point.  In the Sursum Corda the priest says, “Lift up your hearts”, and the people respond, “We lift them up to the Lord.”  This is taken from Revelation 4:2, where John was lifted in the Spirit and in a sense “raptured”, united with the Church in heaven.  When we come together, we don’t worship God among ourselves – we join the Church in heaven in worship.  We’re lifted in the Spirit and join the angels, archangels and all the company of heaven in worship, and say, “Holy, holy, holy, LORD God of hosts” (Isaiah 6:3).  We’re reminded of how God saved and redeemed us; we receive Christ in the Eucharist. The Spirit, who gathers us, scatters us again in the world after the Eucharist: “Go forth in the name of Christ!”

Let us reclaim the sacredness and power of worship

We need to reclaim the sacredness and the power of worship, to remind us that Sunday is a celebration of what Christ has done on the cross, and because of what He has done we celebrate the new creation.  Sunday is not primarily for leisure but for worship, to ascend to the throne room of God.  We are in this world, but not of it.  When the Church becomes like the world, we give the world a reason not to come and be part of the Church.  Today as we celebrate the Feast of the Ascension, we ascend to the throne room of God and worship Him with the saints in heaven, with angels and archangels, and proclaim how great He is.