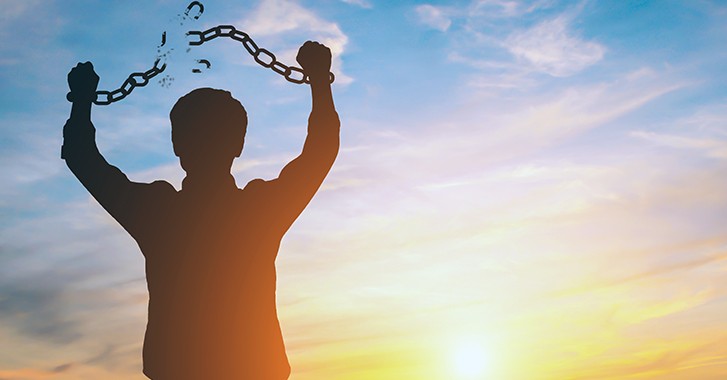 The book of Exodus tells the story of a people in slavery set free by God to have their own identity and dignity and to become His witness to the world.  It tells how God in His power and might intervened to free slaves and make them a people unto Him.  God told the children of Israel, “I chose you not because you were numerous or special but because I have set My love upon you”.

The fight for freedom

Countless books have been written about man’s quest for freedom; million-dollar movies have been made to convey the message of the unacceptability of oppression, and the cry of the human heart to be free.  According to a Jewish commentator in the USA, freedom is the desired human condition that people are willing to fight for.  No one wants to be oppressed – neither does God want anyone to be oppressed. ‘It is better to eat a poor man’s food and be free than to eat a rich man’s food as a slave.’  Freedom leads to the possibility of improving one’s circumstances: an unlearned person is free to learn, study and read; a person is free to work, retain and enjoy the fruits of their labours, improve their lives, and perhaps become wealthy.

On 4 July 1776, 13 colonies in America declared their independence from King George III.  On 14 July 1789, the people of Paris stormed the prison of the Bastille as part of the French Revolution, ridding themselves of the monarchy and of God.  The Philippines gained independence from Spain on 12 June 1898.  Many countries celebrate something in relation to independence and freedom. Viktor Frankl (1905-1977), a Jewish concentration camp survivor, described “the last of all freedoms”.  Before man desired and fought for freedom, God gave freedom to humanity. Freedom is permanently written in the soul of man – no wonder man fights for it.

Freedom cannot stand alone, otherwise it gives a blank cheque and only results in anarchy.  The pervasive concept of freedom to do what is right, and the ability to do whatever one wills, is very confusing.  For example, is it freedom when a drug addict with a syringe injects a hazardous drug into his body?  Freedom means that an individual can do right or wrong; that an individual can believe that God exists, or that He doesn’t. We are free moral agents.  But even if an individual doesn’t believe in God, that doesn’t change God at all – it only changes man’s destiny.  The many ills humans experience or inflict on their fellow humans is a consequence of the abuse and misuse of this God-given gift.  People who fight for freedom for its own sake end up in the same situation that they fought against.

Why then did God give man free will or freedom?  C.S. Lewis said, ‘Because free will, though it makes evil possible, is the also the only thing that makes possible any love or goodness or joy worth having.’  God gave us free will so that we may love, obey and serve Him from the heart. Although He knew what could happen as a result of free will, He would rather take the risk than have people loving Him because they are programmed to do so.  We love God because we have such freedom, rather than loving something else.

True freedom is in Christ

Isaiah 42:7 says the Messiah would come “to open blind eyes, to bring out the prisoners from prison, and them that sit in darkness out of the prison house”.  The promise of the Messianic age, embodied in Jesus’ ministry, was because God intended man to be free.  The blind see, the deaf hear, the lame walk, the dead rise, sinners are forgiven: this is what Jesus came for, which points to eternal freedom.  On one occasion Jesus said, “Should not this woman have been released from this illness?  Isn’t she the daughter of Abraham?”

When Scripture speaks about freedom, it often speaks of freedom from the tyranny of sin and death – the worst tyrannies of all.  The question is, how can I be responsible for the gift of freedom that God gave me?   After receiving freedom, St. Paul said, “I have been crucified with Christ, and it is no longer I who live, but Christ lives in me”.  He offered his freedom back to God, from whom he received it, by living for Christ.  He tells the Galatians, “It was for freedom that Christ has set us free”, and warned them not to use this freedom for selfish intentions.  Jesus, the Source, Giver and Author of all freedoms, gave His life in obedience to the Father’s will on the cross.  Are we missing something from these examples?  They both used freedom from a godly perspective. Remember, Jesus said that he who tries to find life will lose it, but he who gives his life to God will find it. Freedom must be used to serve God instead of serving self, or self-enrichment.  There is greater freedom in giving my life to Christ than in asserting it myself.

Today and every Sunday, we celebrate the Eucharist: the children of God celebrate liberation from the power of sin and death, which the Bible calls true freedom.   We can only be free if we are in Christ – otherwise there is no such thing as freedom, or we are missing its true essence.

The body of Christ Jesus, was broken on the cross to break the yoke of slavery, oppression of sin and death, in our lives.  The celebration of the Eucharist is a celebration of victory, triumph and true freedom that can only be found in Christ.