Feast of the Conversion of St. Paul 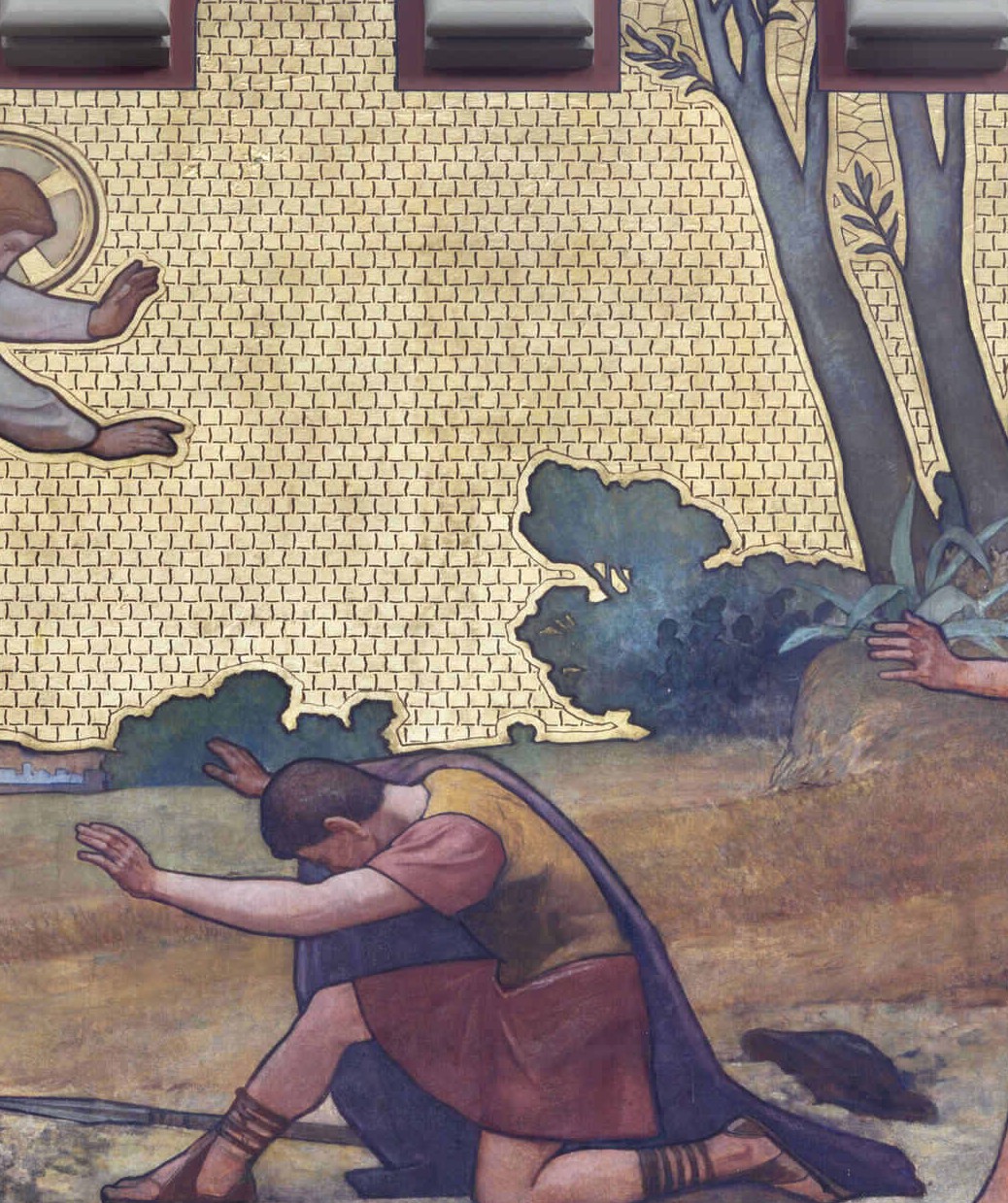 Today we not only celebrate the life of a great apostle, but we’re particularly reminded of the starting point.  We see the power of God’s grace, even upon those who were against Christ, in his conversion from a zealous persecutor to a passionate, ardent apostle of our Lord.

Saul of Tarsus was brought up as a Pharisee, attending some of the best schools in his time, and was an enemy of Jesus Christ.  After Stephen’s death, at which he was present, Saul began to harass the Church: entering house after house, he dragged people out and threw them into jail.  In his day, “Judaism” referred not to a religion but to a commitment to preserving the ancestral tradition of the Judean people; they defended it with zeal against any perceived threat, and were willing to die for it.  Saul demonstrated that zeal:[1] he was convinced that this new sect called “the Way”, comprising Jesus’ followers, was a threat, destructive to Judaism, and must be stopped at all costs.

On his travel to Damascus, the Lord intervened by a sudden flash of light brighter than the sun; Saul was thrown to the ground and heard a voice: “Saul, Saul, why do you persecute Me?”  Jesus made it very personal, that persecution against His followers was persecution against Him.  Saul had enough sense to ask, “Who are You, Lord?”  The voice identified itself: “I am Jesus, whom you are persecuting”.[2]  This was the turning-point in Saul’s life – how can you go against such a light and a voice from heaven?  It was the moment of his conversion: a determined persecutor became a vessel of election.

This Feast originated in Gaul (France) in the sixth century, and is celebrated on 25 January, when Saint Paul’s relics are presumed to have been transferred to the basilica in Rome.

The path of repentance and transformation

Many people think of conversion (Greek, metanoia; Latin, conversion) as converting from one religion to another, but in this case it means “turning around” – like a vehicle making a U-turn – and responding to God’s call in Jesus Christ in faith and repentance.  The disciples, when Jesus called them, left what they were doing and followed Him in faith.  As Adam and Eve disobeyed God and severed their relationship with Him, our life as Christians is repentance: not drawing away or running away from God, but turning to Christ.  Jesus came to lead us back: He’s the Way, the Truth and the Life.

Conversion to be a Christian is to be on the path of repentance: not a one-time but a lifetime event; Baptism is the starting-point, not the end.

Conversion radically transforms one’s heart, mind, will and priorities, and leads to a new life; if this isn’t evident, it may be imaginary or an illusion.  True conversion brings transformation, as we’ve seen in the life of the Apostle.  Saint Paul’s conversion was a starting-point.  A more intimate encounter with Christ would follow: he spent many years in the Arabian desert.  Writing to the church at Corinth about the Eucharist, he said, “I received this revelation from Christ Himself”.[3]  He wasn’t one of the original disciples, but he knew Jesus in a unique manner by spending time with Him.

Through his writings we see more of Saint Paul’s personality.  He was resolute, daring and audacious.  His life was fast-paced, “always digging deeper, moving forward, adding more to the agenda”.[4]  He was untiring and would never stop: after climbing one mountain he’d look for another.

He was no chameleon that blended in with the popular culture – he “passionately advocated a configuration of devotion that was new to many people and to the Roman world”[5] and known only by a few, the followers of Jesus.  It shocked Judaism, his contemporaries and the Roman world.  Can you imagine Saint Paul advocating the worship of the God of Israel in Jesus Christ?

This new way of worship Paul introduced was totally foreign to them, but he passionately shared it with the Roman world and his contemporaries.

Paul’s letters were written when Christianity or devotion to Jesus Christ was in its infancy.  By writing letters he guided the young communities of Jesus’ followers he’d founded, exhorting them to live in a world that didn’t understand them.

Paul had a mixed reputation because of his views and controversial practices:

But at the very heart of the Apostle was…

…his passion to preach the Gospel (Romans 1:16)

The Twelve preached what they’d seen, heard and witnessed as they associated with the Lord; Paul had a unique relationship with Christ, who revealed Himself to him.

The furtherance of the Gospel was at the top of his list.  Paul preached the Gospel from Jerusalem to Illyricum: it reached almost every part of the Roman Empire, leaving few new places (Romans 15:23); then he planned to go to the west of Italy and Spain.

He wrote these powerful words which give us an insight and a glimpse into his passion to preach the Gospel: I may be in prison, but the Gospel is not imprisoned.  He trained Timothy, Philemon and others to have the same zeal and passion.

What is the Gospel?

This is a question that would take volumes to answer.  Some say it’s:

All those answers are correct, but Mark 1:1 says it’s primarily concerned with Jesus Christ, the Head of the whole body of those who are being saved.  The Gospel isn’t about me – it’s about Jesus.  When John wrote Revelation, he said, “this is the revelation of Jesus Christ”:[7] it isn’t the revelation of anyone else – it points to Christ.  When we worship God on Sundays, Jesus is at the very centre; worship isn’t for the pleasure of the worshippers, but to bring honour and pleasure to the God whom we’re worshipping.  I’m not the centre of worship – Jesus is.

When Jesus proclaimed the Kingdom in His earthly ministry, it was accompanied by the healing of the sick, the raising of the dead, the multiplication of bread, the deliverance of those oppressed by the evil one and the forgiving of sins.  This is summarised in Acts 10:38.  The proclamation of the Gospel is always accompanied by the power of the Holy Spirit.  Imperative to the preaching of the Gospel is the witness of the body of Christ, the Church, embodying and demonstrating the Gospel: these are two sides of the same coin.

Last Friday, I officiated at the burial of one of our members, Myrna Macale.  Among those present was a couple who’d travelled to attend, one of whom was recovering from a major medical issue and had been in hospital four months.  On new year’s day, Myrna had given them a food basket; they said it made their new year truly a celebration and they’d never forget what she did.  We’re to proclaim the Gospel, but people need to see it embodied in the Church.  Power will come when the Gospel that’s preached is accompanied by action.  Jesus not only proclaimed the coming of the Kingdom, but did many signs, wonders and miracles.  I pray that God will raise apostles among us like Saint Paul, that we’ll be refreshed by the anointing of the Holy Spirit, and that again the Church will see the fivefold ministry in action.  Beyond that, I pray we’ll be refreshed in an understanding that the preaching of the Gospel is accompanied by the power that’s been given to and in the Church, an earthen vessel – that the whole world may see and witness the power of our God.

[4] Bruce Longenecker, “What do we find in Paul’s letters?”, The New Cambridge Companion to St. Paul, p.3