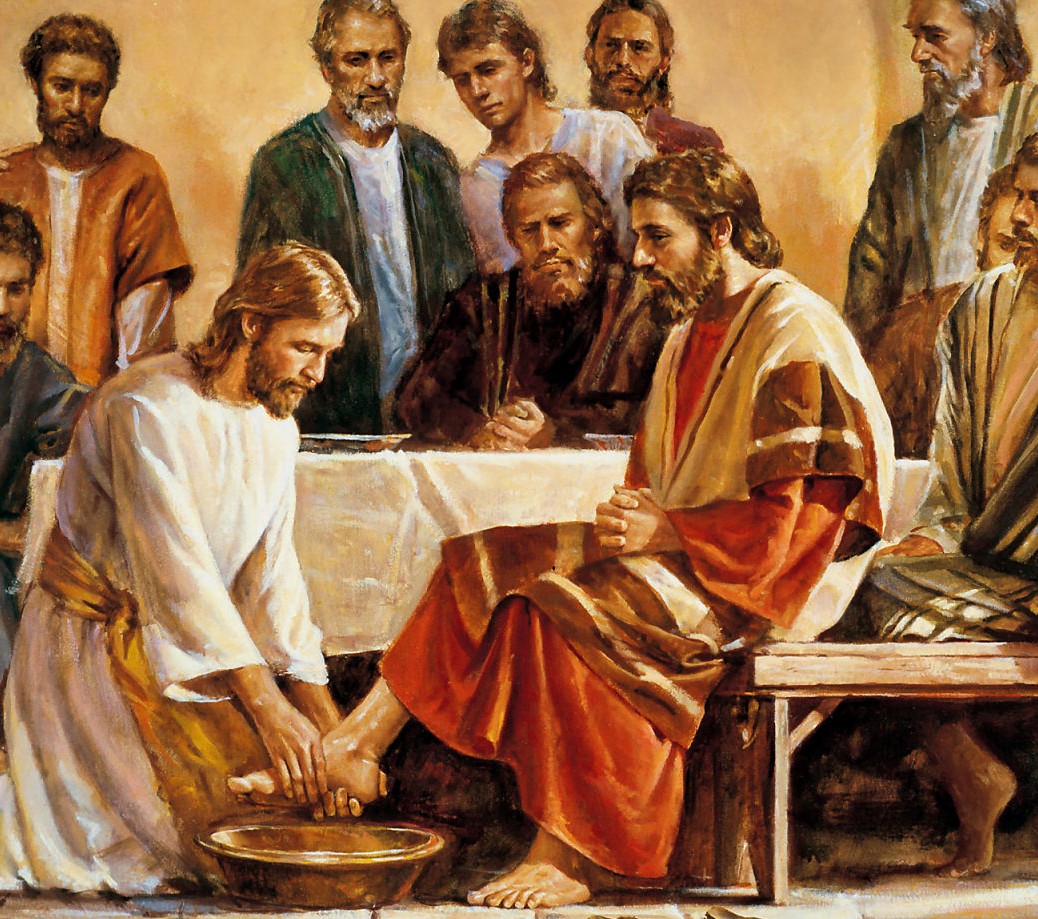 From the thirteenth chapter of John’s Gospel, we see a transition from Jesus’ public ministry to a private one.  He leaves three important things to His disciples and all of us:

If Christ, the Creator is willing to serve, those of us who follow Him must inevitably serve.  If the Master is willing, so are we.

Jesus rose from supper, laid aside His garments and tied a towel around Himself; then He poured water into a basin and began to wash the disciples’ feet and wipe them with the towel.  He’s the Master, yet He performs for His disciples a service that was reserved only for slaves in their time.  They were shocked, astonished by what He was doing.  No wonder Paul said He emptied Himself of all His privileges and was willing to stoop down to serve humanity.  Contrary to the first Adam, who’d tried to grasp divinity for Himself, to get something that wasn’t given to him, Christ moves in the opposite direction, coming down from His divinity into humanity, taking the form of a bondservant and becoming obedient even to death on the cross.  All this is rendered visible in the single gesture we’ve heard in the Gospel today.  Jesus represents all His saving ministry in one symbolic act of service.  He denies Himself His divine splendour and kneels down before us.  He washes and dries our feet, soiled by sin, for us to be fit to sit at the table with Him for God’s wedding feast.

Jesus not only washed His disciples’ hands, but their feet.  The practice of foot washing was common in the Eastern world at the time.  Roads were not cemented but dusty, and because of the dry climate people wore sandals.  It was natural upon entering a home to have one’s feet washed – not by the host but by the servants.  Jesus’ choice to wash His disciples’ feet broke the rules of social order.  By assuming the role of a servant, Jesus was demonstrating the love He would soon express in the humility of the cross.  When we look at the cross, we see not only death, but Christ serving humanity – an expression of love and sacrifice which His disciples themselves didn’t understand, for some of us is difficult to understand, and the world doesn’t understand.

Peter said, “You’re not going to wash my feet”; Jesus said, “If you don’t let me wash your feet, you have no part in me”.  Simon Peter was reasoning in the following way: one who washes another’s feet is a servant; one whose feet are washed is the master.  He couldn’t understand this, because Jesus was the Master; he couldn’t accept the service of the One who was his Teacher and Lord – it would violate the fundamental order of justice.  Because of his righteousness, he didn’t want to allow Christ to wash his feet.  Yet Jesus was adamant.  He stood before His disciples as a servant, holding in His hands a basin full of water and a towel: “If you don’t let Me, you have no part in Me”.  Peter said, “then wash my whole body”.

Later, Jesus said to them, “A new commandment I give to you, that you love one another even as I have loved you”.[2]  “Maundy Thursday” comes from the Latin mandatum novum, a new commandment.

At the “Last Supper”, He instituted the Sacrament of the Holy Eucharist, which we do until He comes.

The only response is to serve

The Creator of heaven and earth served creation in a most humble, indescribable fashion.  How could that be?  Humanity is at loss for words, unable to comprehend our Lord’s actions this night.  He stoops down to the lowest so He can raise us to the highest with Him.  The question we’re left to think about is: What is the appropriate response for those who’ve received such an act of servanthood?  What could be the proper response to a Master washing the feet of His slaves?

Though we may not completely understand what Jesus did, it warrants a response.  When we come to the realisation of how Jesus served you and me on the cross, the only conceivable human response is to serve Him and those who are around us.  You don’t have to be a clergy; you don’t have to give up your job unless God tells you to do so, like some of us who’ve left everything to serve Him.  It’s because of this realisation – how can my Lord serve me on the cross?  The question I ask myself is: What can I do for You, Lord, to serve you?  Whether you’re an architect, a doctor or physician, whatever is your profession or trade, when you do it unto the Lord, you’re serving God.

May we all renew our hearts and minds and our commitment to serve God, letting go of serving self.  We reflect on how a Master, the Creator of heaven and earth could serve you and me.  He came down to the lowest so He could raise us to the highest.