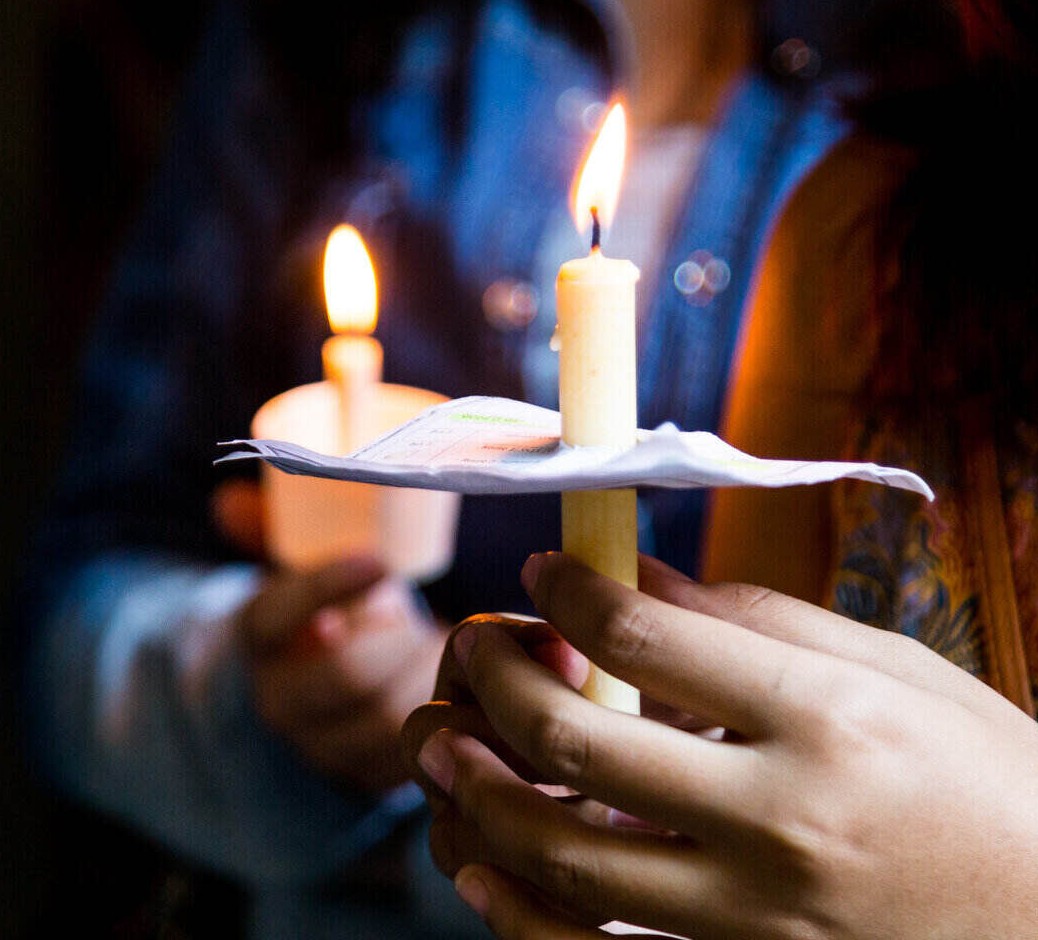 Christian celebrations are not empty festivities or void of meaning.  More than celebrating historical events, they recall God’s awe-inspiring actions that brought old creation to a new creation.  When the Church speaks of Christian redemption, it’s a fabric woven of different pieces put together from the Incarnation to the Resurrection.

The early Christians called the Easter Vigil the Christian Passover.  They gathered together from Saturday evening until the dawn of Sunday.  The lamp of lamps was blessed; readings were interspersed with chants, songs and hymns.  After the Bishop’s sermon, he baptized and confirmed those who’d been prepared through fasting, prayer and meditation on the Word – there were many readings.  Originally it was for those who were to be baptised and confirmed; eventually the whole church joined them, to refresh their thinking and hear God’s holy Word from Creation to the Flood to the Exodus from Egypt to the promise spoken through the prophet Ezekiel.  Those who were newly baptised and confirmed for the first time received the Holy Eucharist.

Passover and the Eucharist

Read Exodus 12:1-14.  “Beginning of months” (verse 1) indicates a new beginning; it points to the new creation that one day will happen through Jesus, the Passover Lamb.  Bitter herbs symbolise the bitterness of their life in Egypt.  This is what we’re celebrating today.  God commanded Moses that at twilight they were to kill a lamb and eat it quickly, roasted with unleavened bread and bitter herbs, with loins girded, shoes on their feet and a staff in their hand – so that when He said, “Leave, go now!”, they would be ready to do so.  Paul tells us we should not take the Eucharist for granted or receive it without understanding.[1]  We need to be ready, desire it, and come to it with an open heart – I’ve even seen people healed as they receive the Eucharist.  God was going to do something remarkable and extraordinary which no-one and even the children of Israel hadn’t seen.  He would pass over them and smite the land of Egypt, while sparing Hebrew households with blood sprinkled on the doorpost.  Today we eat the blood of Christ – the sign of the blood spared the children of Israel from the angel of death that went through the land.

Pascha for early Christians was about redemption.  In everyday life, redemption is to purchase a person’s freedom, or the buying back of an object from another’s possession.  In the Old Testament the acts of God’s redemption were demonstrated, by which He delivered His people from bondage.  The Old Testament work of redemption culminated in the cross of Jesus Christ, by which believers are liberated by the bondage of sin.

The Passover Seder is celebrated by Jewish families, and the promises of God are spoken: “I will free you, I will deliver you, I will redeem you, I will take you to be My people, I will be your God, I will bring you into the land, I will give it to you for a possession.”  This celebration is to remember – and from there they take their identity as a people – that God freed slaves from the clutches of Pharaoh and Egypt, and made them His own people – as He said, “I will be your God, and you will be My people.”  Paul said, “For you were bought at a price; therefore glorify God in your body and in your spirit.”[2]  If God bought us at a price, then without any question we are His.  I wonder what it meant to Abraham when God said “I will be your God” – God, who is more powerful than the power of all gods combined, redeemed and bought us with a price, with His blood, that we may be His people.  I encourage you to meditate on this.  Jeremiah reiterated those words: “You shall be My people, and I will be your God”.[3]  The God we serve, who delivered us from the power of sin and death, is more powerful than all the gods combined.  Nothing can be compared to our God.

The price of our redemption

I’d like to share a story I thought of when I meditated on our redemption.  Imagine we’re in a courthouse; the judge is seated on his bench, and a criminal is brought in.  The judge pronounces the verdict, and says, “Because of the crime you have committed, you will receive the death penalty”.  But something remarkable happens: the judge removes his robe, leaves his bench, and dies, taking the death penalty upon himself on behalf of the criminal.  This is something you will never see or hear in the world we live in.  In a simple way, that’s what God did for us: He came down from heaven in His Son Jesus Christ and died on behalf of you and me as criminals.  He was innocent, yet He took upon Himself the penalty of man’s rebellion, that you and I today can celebrate new life in Him.  We might still make mistakes, but as Paul said, “Consider yourself dead to sin”;[4] and even if we face mortality one day, Jesus said if you eat of this body and eat of this blood you have life – because of what Christ has done on the cross.  God came down from heaven – as it were, the judge got out of his bench – and died on the cross for you and me.

This is beyond what our minds can fathom: it’s truly the mystery of God’s love.  We don’t have to understand it, as the Church says, because it’s beyond understanding.  But let’s believe and receive it, and receive the hope God has brought to us.  Let the darkness in our minds and hearts be vanquished again today.

As we do every Easter Vigil, we join those who are newly baptised and confirmed and renew our own Baptismal vows.