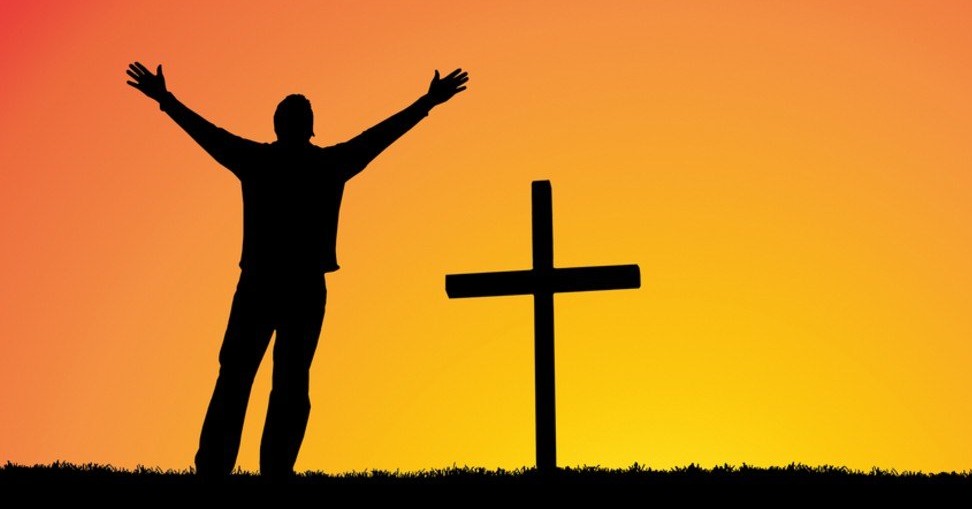 I’d like to share with you what our second lesson says: what does it mean to be born of God?

Today’s Gospel continues the discourse of the organic relationship between God and Jesus and, since we’re in Jesus, humanity.  As we heard last Sunday, Jesus is the True Vine; His cross points to the Tree of Life in the Garden, which will bring forth fruit, a medicine and remedy to the sin that entered humanity.  No one understood John 12:24 until after Jesus’ death and resurrection: because of Christ’s death, now comes life.

Man has always sought some kind of transcendent force.  He realised there are things beyond his control: water causes flooding and destroys; fire burns forests and destroys.  Man would either worship these things or seek a god with control over them.  If man has choices, which god has the most significant power?

Christianity believes man is in search of God because God created man for Himself; in Augustine’s words, “My heart is restless until it rests in You”.  When the God-man relationship is broken, man is left with a void and an endless search; this is one reason why there are so many religions in this world.

Rabbi Saul Berman said, “The more I study ancient cultures, the more I see the absolute radical disparity between the values of pagan civilisations and the values which Torah brought into the world.”  Torah is the Hebrew Bible, God’s weapon in the war against idolatrous cultures.  Israel was surrounded by pagan cultures which worshipped many different gods, until God came to Moses and revealed himself to the children of Israel as the God of Abraham, Isaac and Jacob.  We Christians also believe in the God of Abraham, Isaac and Jacob, revealed in Jesus Christ.

Before the Incarnation of the Son of God, humanity’s relationship with deity can mostly be described as impersonal – faceless, soulless, perhaps with the exception of Judaism.  Exodus 32:1-2 relates what happened while Moses was on the mountain receiving the Ten Commandments – as if the parents had gone on holiday, the younger siblings asked their older brother for a party, and he agreed.  Rabbi Moshe David Cassuto commented: “They [the Israelites] believe human beings can make a god.  Yet they do not realize that whatever human beings make has less power than they have.”

All this changed in the Incarnation of Jesus Christ: His claim of God as His father, and of being one with the Father, was so outrageous to Jewish ears that He was killed.  Jesus became incarnate to demonstrate His relationship with the Father and to bring us to the same kind of relationship.  What God wanted in the first place was not impersonal but a personal relationship with Him.  Genealogies in the Bible may seem boring, but they portray a lineage and continuity.  Luke 3:38 says Adam was a son of God: God wanted humanity to be His sons and daughters in Jesus Christ (I John 5:1).

The first thing that comes to mind is Nicodemus’ encounter with Jesus.[1]  A Pharisee who, like any other Jew, was waiting for the promised Messiah, he came to Jesus by night, fearing what his fellow Jews would say.  Jesus spoke directly to what was in Nicodemus’ heart: “Unless a man is born of water and the Spirit, he cannot enter the Kingdom of God.”  Nicodemus thought He meant a man must undergo another natural human birth, but Jesus clarified that He was talking about the necessity of a supernatural birth from above.  The Evangelist uses this important exchange to point us to the Sacrament of Baptism, which brings regeneration that can only be accomplished by the work of the Holy Spirit.  Through Baptism the individual becomes a new person on the inside, and it’s not man’s doing – perhaps not even the decision of the parents when a child is brought to Baptism – but God’s.  Man cannot repair or regenerate himself: it must be the work of God.

It brings to mind what took place in the Garden when God made man from the dust of the earth and breathed into him the breath of life – only then did man become a living being.  At Baptism, God breathes into the candidate the breath of life, and he or she becomes a child of God.  The very life of God is now in us.

Gregory of Nyssa in the 4th century said that at Baptism, “The reign of life has begun and the tyranny of death is ended.  A new birth has taken place; a new life has come.  Faith is the womb that conceives this new life.  The Church is the nurse; her teachings are its milk and the bread from heaven.  It is brought to maturity by practice of virtue; it gives birth to hope.  Its home is the Kingdom of God, its inheritance the joys of paradise.”  When someone is baptized, we say, “This is the day that the Lord has made”: it gives us a different perspective on what that day means when that child who has inherited the nature of Adam has finally become a child of God.

Through the Sacrament of Baptism, we’re born of God.  Because we’re born of God, we’re born of love, and the fruit of our life should be love.  Didn’t Jesus say the world will know who we are because of love?  It would take our lifetime to learn to reflect every day the love of God.  This is why we shouldn’t become tired of listening to the Word of God, because we don’t know love only in one hearing.  It’s like a diamond: when you move it, you see a different facet.  One day we’ll see love Himself; but in this life, we reflect and realise that we’re born of love, and that the world will know we’re in Christ because of that love.   May God give us the strength and new love in our hearts; may that love be rekindled, not only for God, but also for His words and Commandments, and may the fruit be seen in the life of the Church.