The cross, the robe and the crown 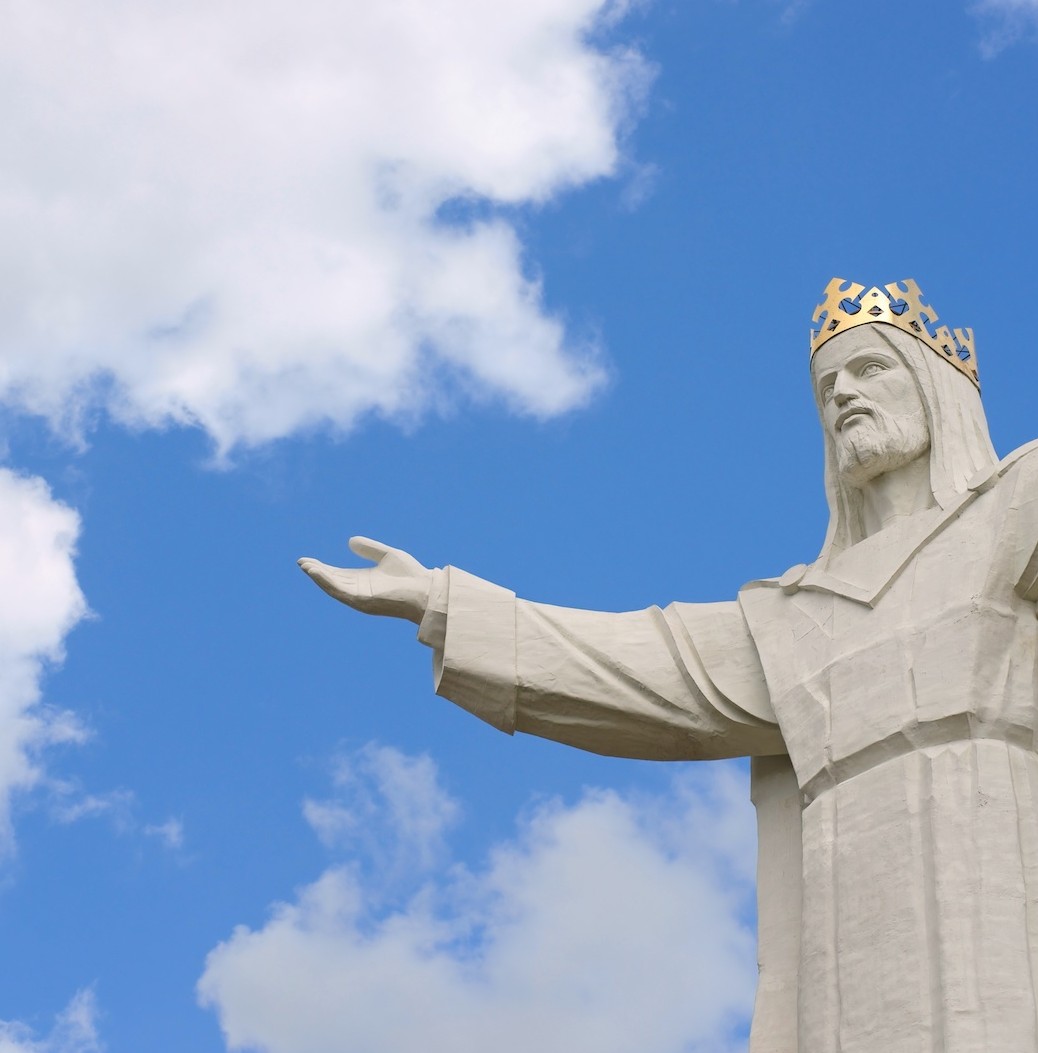 The Feast of Christ the King was instituted by Pope Pius XI in 1925 in response to growing secularism and nationalism in Europe and the world.  The Old Testament recounts how God established a Covenant with His people to bring a Saviour and Redeemer; the New Testament tells a story of the rightful King who has “landed in disguise”[1] to rule and reign among us.  The first lesson describes how Daniel saw this in a vision.  The book of Daniel has many images speaking of empires that would come and go – even the most powerful empire in the world doesn’t last; but there’s one kingdom that will never pass away: the Kingdom of God.  We read in Hebrews 1:1-8 about who Christ is; Paul said many things after the Resurrection about this, and so does Hebrews.

In the Gospel, Jesus was on trial before Pilate, who asked, “Are you the King of the Jews?”  Jesus answered, “Did you hear this from others, or did it come from you?”  Pilate evaded this direct confrontation; he was looking from the political standpoint that Jesus was endangering the peace in Judea and undermining the rule of Caesar, whom Pilate represented.  Jesus said in essence that political power has a military basis, among other things, but God’s Kingdom is based on truth, not human power.

We’re between two significant events: Jesus’ crucifixion, and Christ’s Second Coming.  Behind us is the cross and in front of us is the crown.

We join in heavenly worship

Revelation 4:1-4 describes something similar to what Daniel saw.  The book of Revelation was written by Saint John.  He saw heavenly worship, and wrote down what he saw to encourage the churches and all of us.  Perhaps we see worship as coming to church and fulfilling a religious duty, but Revelation tells a completely different story.  John was caught up into heaven and saw a vision.  The Sursum Corda says, “Lift up your hearts”: John was lifted up into heaven and joined in heavenly worship.  Sometimes we think of worship as God coming down from heaven.  But worship is temporarily leaving the world behind, so to speak, and entering into heavenly worship, where we join the saints who’ve gone ahead of us, who have finished the race.  That’s where we’re encouraged; afterwards, we go back to the world with a different perspective.  There’s a danger in trying to bring worship down, when worship is going up, and it’s to lift us up.  It causes humanity to receive its dignity in Christ, and restores humanity to what it was created to be.  Verses 8 and 11 describe what worship is all about.

There were twenty-four thrones around God’s throne.  Israel was divided into twelve tribes, and the New Testament Church is spoken of as twelve tribes; the twenty-four elders are a “double portion” of twelve.[2]  The elders are called priests and kings according to the New Testament priesthood.  When the Church comes together, we not only pray for ourselves, but we come before God on behalf of the world He saved.  When a priest faces the people, he speaks on God’s behalf; when he faces the altar, he prays on behalf of the people.  When the priest says, “The Lord be with you”, and the people respond, “And also with you”, his prayer is not only his personal prayer but also the prayer of the people.  The priest prays on behalf of all who are present, and they pray on behalf of those who are not present.

The elders wear not only robes, but also crowns.  David Chilton wrote of the Reformation’s “rationalistic tendencies” to adapt doctrine and worship and “democratise” the Church and ministry, as “steps along the long and dusty road toward Reformed barrenness”.[3]  Images were removed from the Church.  The reason we have images is not to worship them, but because we’re surrounded by images; it was like “throwing out the baby with the bathwater”.  The Church has always been liturgical; taking away the robes and crowns and the essence of liturgy led to wilderness.  Richard Paquier, a Protestant clergyman, said,

“Colour is a teacher through sight, but colour also invokes certain moods.  We misunderstand human nature and the place of perception in our inner life when we downgrade this psychological factor in the Church’s worship.”[4]

Chilton said the reason Old Testament priests wore robes was to emphasise their role, “in the same way that judges in our culture wear robes” – which originated from the Church.  Paquier continues,

“Therefore it is natural that the man who officiates in the worship of the Church be clothed in a manner corresponding to the task given to him, visibly expressing what he does.”[5]

We wear vestments to signify who we are – not the priest, but the Church: we believe in the priesthood of the believers.  Similarly, the wearing of crowns in some churches during the Feast of Christ the King is to remind us of who we are.

No one likes war, but Europe experienced two world wars last century.  Many Europeans turned away from the faith because they couldn’t comprehend why God would allow people to be killed.  War is brutal; but when evil becomes embodied, it warrants war: when people want to harm others, there’s a need for physical confrontation.  Men go to war, not because they’re resentful of another nation, but because they think of the future of their children and grandchildren.  Sometimes they are killed or return without arms and legs, but they receive medals for their noble and heroic actions.

Jesus went to the cross to wage war against the evil one so we would be saved.  Saint Paul exhorts us to “fight the good fight of faith” against the flesh, the world and the devil, until we finish our race.  Then, and only then, will you receive the heavenly crown God has prepared for you.  If you stay at home, you’ll have your arms and legs, but you won’t have fought the battle.  Even though we struggle and sometimes fall on our knees, we have to stand up.  That’s why we come against individualism: in this world you need someone to pick you up when you’ve fallen.  Don’t accept the individualism we hear around us.  We need to finish the race that is set before us.  You cannot give up, because your victory is in Christ; without Christ we don’t have the victory.