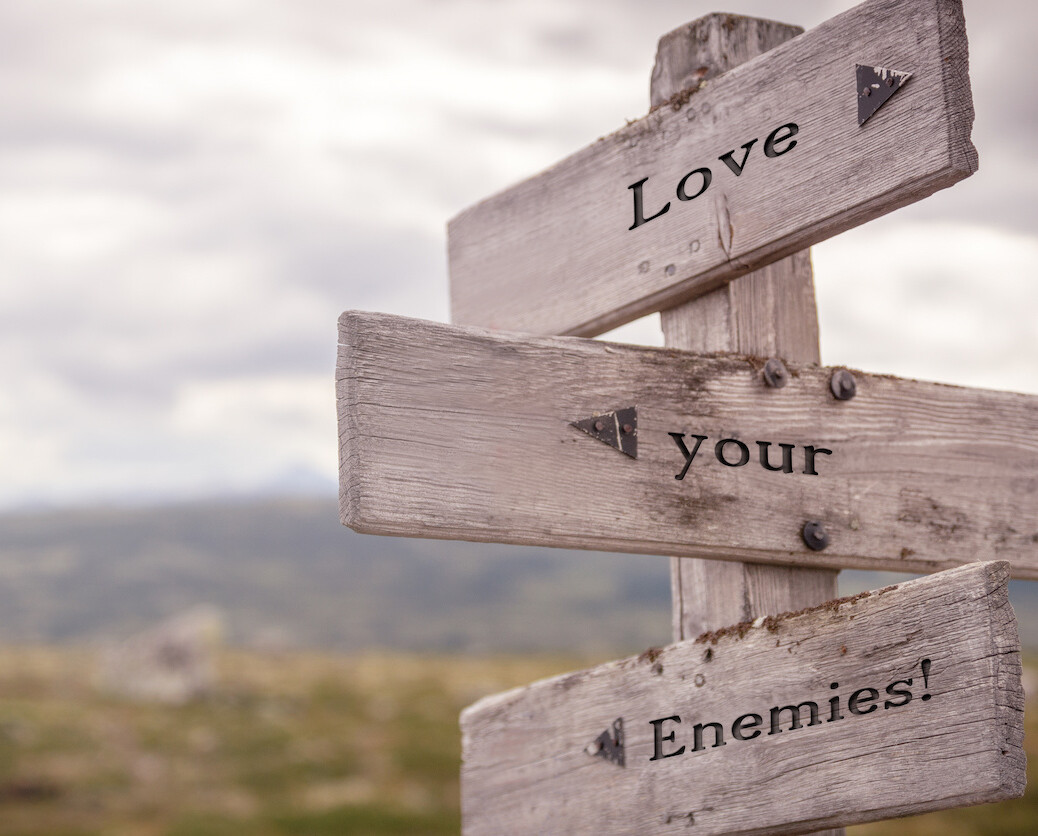 Last Sunday we heard the Blessings and Woes, also called the Beatitudes in Matthew’s Gospel.  People found them shocking, as Jesus was introducing a new kind of discipleship.  His words todayare a continuation; they were very unsettling to His listeners and followers, and probably are to us.  Jesus raised the bar: He said it’s easy to love someone who loves you, but the love He was introducing goes beyond that, to the point that you must love your enemies.  Some things Jesus said made people want to leave, because they were too hard.  Tell the Ukrainians to love the Russians right now, and you may understand the magnitude of this.  When Jesus said, “Unless you eat My flesh and drink My blood, you have no life in you”, many of His disciples left, because they couldn’t comprehend it.

There are many questions I’d like to ask Jesus – partly from my human weakness, ignorance and pride.  I know that God is love, and I need to learn that everything He allows to happen is not for my detriment but for my good.  When we reach the other side of this life, we’ll see things from a different perspective, and all our questions will be gone.

Bitter pills to cure our weakness

Jesus in essence was saying, “You need to love the Romans who are occupying your land”.  This was a great disappointment to His listeners and followers – they’d perceived Him to be a revolutionary figure who would lead a revolt against Rome.  He was also alluding to one of His disciples who was a tax-collector, considered a sinner, and saying they must learn to love him.  This applies not only to people we don’t like outside the church, but also inside it.  The more you don’t like them, the more they come to you, and there may be many of them.  Archbishop Adler told a story of a week-long meeting, during which a woman interrupted his preaching every evening.  He asked the Lord what was happening; God told him, “I sent her”.  Sometimes things come to us that we don’t like, but God is orchestrating it because He is doing something in us.  Let us not be hasty in resisting problems – they have their blessings if we allow God to work in our lives.

Some of Jesus’ sayings are not easy to follow and practice.  Could this be because of the weakness of our fallen nature?  Are such imperatives the bitter pills that may be antidotes and cures to our human nature?  The reason why it’s difficult to love is not because it’s impossible to love; but we are weak in loving others who do not love us, because of the frailty of human nature.  For that reason we rely on God’s grace and mercy.  Jesus would not ask us to love our enemies if it were wrong; the reason we can’t love them must be because of our human frailty.  Some of the things Jesus said may be a medicine; this is why they’re sometimes hard to swallow.

The Old Testament reading is from the life of Joseph.  It’s a long, detailed account of rivalry among half-brothers, a story of intrigue, jealousy, anger, attempted murder, slavery, and striving for human greatness.[1]  All these things cling to us like barnacles.  (Barnacles are creatures that stick to oysters and mussels.  They’re very difficult to remove: I’ve tried several times, and my hands became painful.)  But this is equally a story about forgiveness and reconciliation, and – better yet – grace, mercy, and divine providence which weaves beautifully in and out of it; behind the story, God is moving.

Joseph was Jacob’s eleventh son, his elder son from Rachel.  Jacob provoked resentment among Joseph’s siblings by favouring him, then Joseph dreamed of his brothers bowing down to him.  They threw him into a well to die, but changed their minds and sold him into slavery.  In Egypt he was accused, imprisoned and rose to power; his wisdom in leadership saved the world from starvation during a severe famine.  The story becomes more intense when his brothers went to Egypt.  He accused them of spying, made them bring his younger brother Benjamin, and finally told them who he was.  There were different emotions fighting in his heart:  Will I love them because we came from the same father?  Or will I take this golden opportunity for revenge since they mistreated me?  This happens to us all.

In his book about Joseph,[2] John Lennox cites two incidents:

They were totally opposite: one was hurt, the other was able to forgive.  Some cultures forgive more easily; others keep a treasure of ill wills until they die.

After Joseph revealed himself to his brothers, Jacob settled in Egypt.  Eventually he died, causing Joseph’s brothers to fear possible retribution.  However Joseph said, “You meant it for evil, but God turned it for good.”[3]  In other words, “You were unwitting players:  If you hadn’t sold me into slavery, the world would have starved to death.  Now I see that in all that happened, God was orchestrating something, not only for me and for you, but for the whole world.”  Do you see how great God is?  Joseph didn’t understand completely, nor did his brothers.  This was before Saint Paul wrote, “Bless those who persecute you; bless and do not curse them… Live in harmony with one another.”[4]

Jesus loved His enemies on the cross

God is the source of love, and does not need to be loved; but every single one of us does. This is why God loved man.[5]

We might say, “Jesus, it’s easy for You to love Your enemies, because You are God – I am not God”.  Romans 5:10 (NRSV) says, “For if while we were enemies, we were reconciled to God through the death of His Son, much more surely, having been reconciled, will we be saved by His life.”  Jesus came to die on the cross for you and me because He loved us.  Adam and Eve’s sin in the garden was not about sex, or eating something forbidden – it was about treachery.  They were considered traitors because they sided with God’s enemy, and they followed and obeyed, and became slaves.  God gave them everything, but through the enemy’s deception they turned and stabbed Him in the back.  Saint Paul says that while we were yet enemies, God loved us – Jesus died for His enemies.[6]  He is not asking us to do anything He did not do Himself.  I was an enemy of God, a rebellious child, like a prodigal son, whom God gave everything, but I turned and stabbed Him in the back; and yet Jesus loved us by dying on the cross.  Today’s Scripture is not primarily about us – it’s about Jesus, who loved His enemies on the cross.  That’s what we are to follow.

Imagine a judge seated in his court.  Someone is tried as a criminal, found guilty, and sentenced to die by electric chair.  Then the judge removes his robe, goes down to the criminal, takes the blame, and dies on his behalf.  That is what God did for you and me.  He knew that you needed His love, even though you were His enemy.  He knew that we would disobey Him, that we would make promises and not do what we promised; and yet He loved us.  How can you not love God?  The enemy was you and me, and His love changed you and me.  The Church’s work is to share that love with the world – that God doesn’t have anything against them.  We blame God for things that happen in the world, when we should be blamed.  But Jesus the Judge comes down and takes the penalty on the criminal’s behalf.

You’re reading this message today because Jesus wants to reveal to you how much He loves you.  If you’re contemplating suicide, and saying “No one loves me”, I hope you hear my voice.  There’s someone very special who loves you – Jesus.  If you receive this message in your heart, you will never be the same again.  It’s one of the most powerful messages in Christianity, that God is love.  He chose to love His enemies, because love is so powerful that hatred could not stand against it, but love can change it.  Even though we make mistakes and do stupid things every day, God loves us – not because He agrees with us, but He gives us the opportunity to repent, and He forgives us for our sins.  Only when we receive that love can we share it with others.  To be a Christian is more than coming to church and singing and worshipping.  It’s knowing Jesus, receiving the love of God, and sharing it with others who don’t deserve it.

Lord, I receive Your love.  Let that love transform me; let it overcome the hatred and evil in my heart. Transform me to be like You, and teach me to love You in return.  We‘re undeserving humans, but You loved us.

Lord, touch the heart of every single one of us today, to allow our pride, sibling rivalry, intrigue, jealousy, anger, and all our human fallenness, to melt in Your presence. Though it’s painful, let us take the bitter pill as an antidote.  Help us to love our enemies, because we were enemies whom You loved.  Help us to bless and pray for them.

If someone hurt you in the past, last week, today or an hour ago, pray for them.  Make a step of faith – don’t wait another minute.  Whoever hurt, mistreated, abused, or even sexually abused you – the power of love is greater.  If someone stole money from you, that’s ok – God will return it.  Pray for that person: Simply say, “I pray for _____.”   Whenever you think of them, pray.  Love triumphs over all, because God is love.