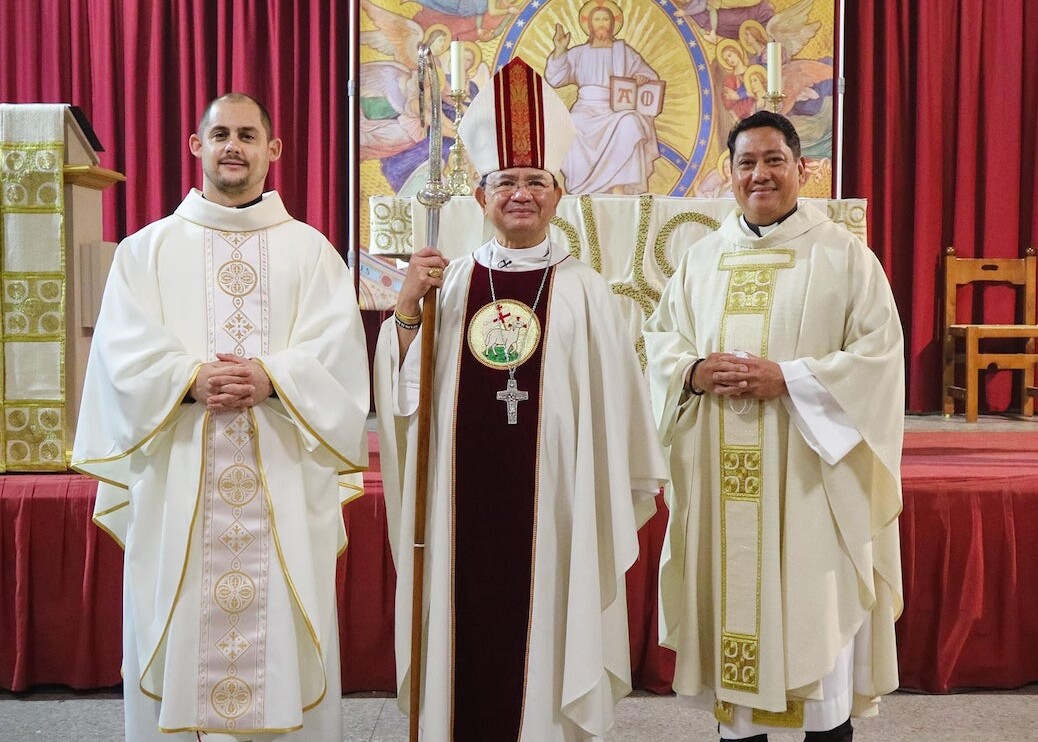 The solemn observance of this year’s holy week at St John the Apostle Parish Church of the Charismatic Episcopal Church (CEC) in Madrid, Spain kicked off with the traditional celebration of Palm Sunday on 10 April at the chapel of Parroquia de Nuestra Señora de las Delicias. Initial activities of displaying, waving, and blessing palms and branches while singing songs of praise to commemorate and signify the triumphal entry of Jesus into Jerusalem highlighted the event. Parish priest Fr Ferdinand Sagana focused his homily on the importance of the Christian life lived in service of God’s people that echoes the mission of Jesus on earth. Jesus’ triumphal entry into Jerusalem symbolically represents his victorious entry into the lives of Christians who have accepted him as Lord and Savior and to whom everlasting life has been granted. Through this, God’s reign in our hearts is realized and we, his children become eternal citizens of his kingdom.

Holy Wednesday on 13 April was specifically devoted to a healing service. It was a blessed occasion that magnified and zeroed in on the perennial relevance of God’s mighty healing power. In His Grace Bishop Elmer Belmonte’s homily, he underscored the timeless power of God to heal the sick through the believers’ fervent and concerted prayers. We have seen in the Scriptures how such power was manifested time and again and we will continue to see and experience how the Lord grants it by way of our deep faith in him through the instrumentality of those to whom such a gift has been bestowed within his church.

Come 14 April which is called Maundy Thursday in the Christian calendar, the church gathered once again to spotlight the significance of Christian service in capturing the essence of God’s mission through the example of his Son Jesus Christ’s life of service to humanity. Bishop Elmer’s homily touched on the value of how the life of faith is meaningfully expressed by way of a life of service in God’s kingdom. The centerpiece of the day was the actual performance of the early Christian church’s traditional ordinance of feet-washing in commemoration of how Jesus symbolically personified a dedicated life of authentic service in humility by washing his disciples’ feet. Along with this event was the equally significant rededication of the church’s clergy whose special charge is grounded in their deep commitment to a life of Christian service.

Good Friday, as it has always been traditionally kept in the Christian church, was piously observed on 15 April in commemoration of God’s supreme sacrifice by giving his only Son to die for the salvation of the lost and sinful humanity. The church service featured the re-creation of the 14 stations of the cross in a “shadow presentation” courtesy of the church’s young people. In his homily, Bishop Elmer gave special stress on St Paul’s exposition of the mystery of Christ’s death on the cross whose peculiarity or oddity is never aimed to highlight the sadness of death but to celebrate the joy of life, for in his death God has bestowed us eternal life. The “Veneration of the Cross” capped the day as parishioners rededicated their lives kneeling before the cross of Christ.

The Easter Vigil on 16 April was a special moment for the church to symbolically anticipate the resurrection of Jesus from the grave. As Bishop Elmer spoke in his homily, the most important aspect of this commemoration is not focused on the Greek and Roman concept of “life after death” which is “the belief that the essential part of an individual’s identity or the stream of consciousness continues after the death of the physical body,” but rather the realization of what St Paul says about the reality of resurrection in Jesus wherein he was raised from the dead in actual possession of a spiritual body. That is resurrection power which signifies that in Christ’s resurrection, death has been defeated and life everlasting reigns victorious among us believers just to prove to the world that Jesus didn’t die for himself but for us to have life eternal. Towards the end of the service, some parishioners received the holy confirmation and were declared bona fide members of the church.

In the most honored tradition of Christianity, the apex of the Holy Week is Easter Sunday which for certain biblical considerations is more correctly called Resurrection Sunday. On 17 April, the church joyfully celebrated the resurrection of our Lord. In his homily, Bishop Elmer zeroed in on the issue of resurrection in relation to the church as Christ’s body. The church that was born in the north and was brought by missionaries to the south has gradually deteriorated in its birthplace to the point of death while in the south, it has continued to grow and thrive from strength to strength, so to speak. In this scenario, if we want to exemplify resurrection power in the life of the church being Christ’s body, look south and witness how the Lord has empowered it in the lives of the faithful believers. Some years back, the Cuban-American Methodist historical theologian Justo Gonzalez already expressed sadly his deep lamentation over this turn of events. But now, we have likewise been witnessing how this resurrection power is being manifested by missionaries from the south as they carry back to the north the faith that they inherited from the ancestors of these northerners.

This momentous day likewise saw the ordinance of holy baptism administered to a Jewess who accepted Jesus as the fulfillment of God’s promise of a messiah and the official reception of a Cuban priest into the fold of the International Communion of the Charismatic Episcopal Church (ICCEC) in Spain with a special charge as a missionary to the Latin American residents of the country. In the words of Bishop Elmer himself, these events prove to us once and for all that the church is no longer just a Filipino church but a multinational church destined to fulfill its mandate to spread the Good News of salvation.