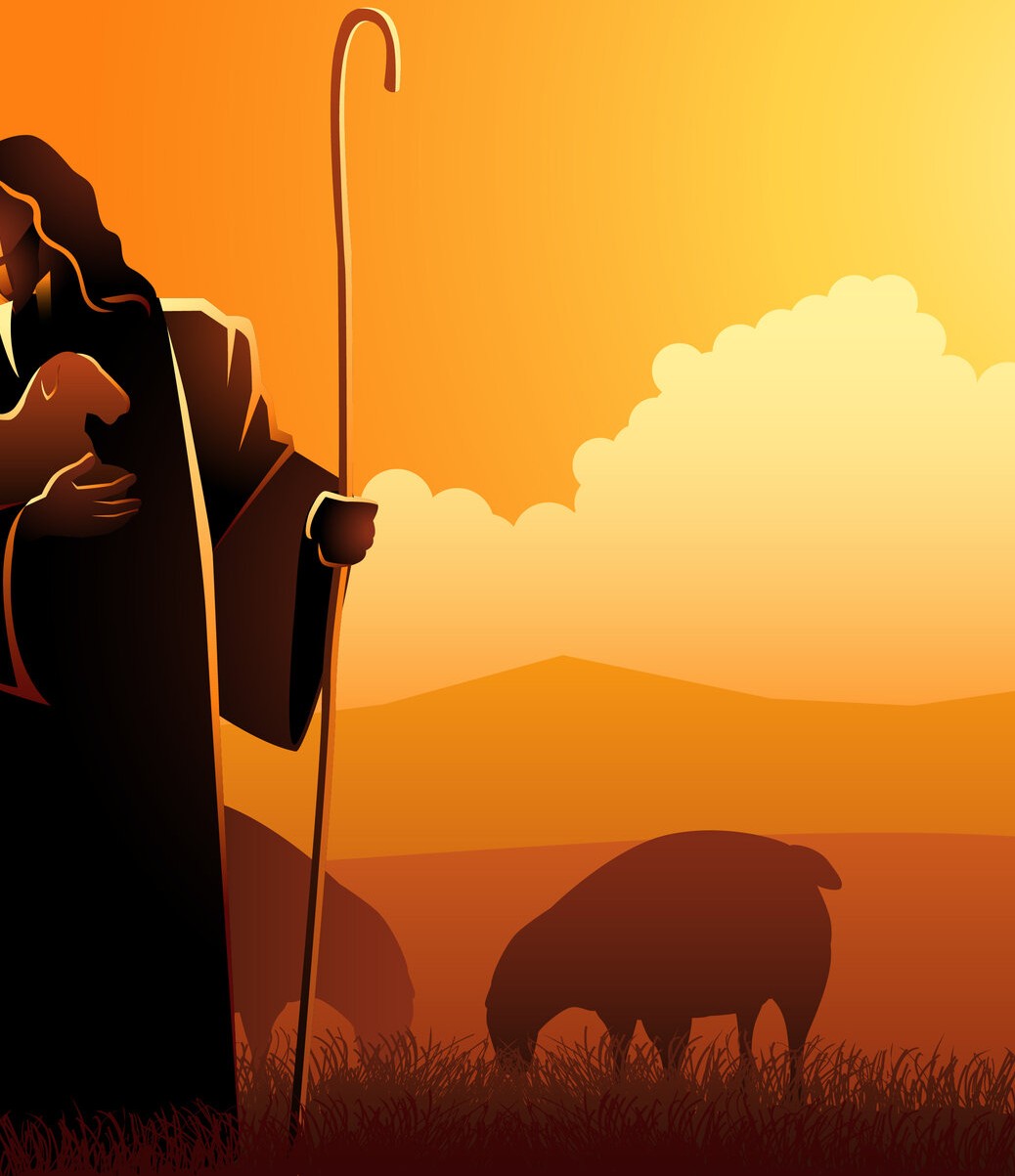 In John 10:22, Jesus attended a religious feast in Jerusalem: the Feast of Dedication, also known as the Feast of Lights or Hanukkah.  The feast celebrates the rededication of the temple after its desecration in 167 BC.  During the feast the Jews remember the shepherds of Israel.  The shepherd is a familiar image throughout the Old Testament: Abel, Abraham, Jacob, Moses, David and Amos were all shepherds.  Jesus’ words were to remind His listeners of all of them, especially Moses and David.  The image of the shepherd as a wise man who understands God’s people is deeply ingrained in Scripture.  Psalm 23, written by David, depicts God as the true Shepherd of Israel.

Modern urban readers risk idealizing this soothing image of pastures and still waters: we tend to forget that sheep need shepherds for a reason.  Although they’re friendly and gentle, they’re also imprudent: they tend to stray and get lost, and they panic easily.  When they get wet in the rain and become stuck in muddy terrain, they can tip over and be unable to stand because of the weight; if left alone, when the sun shines, the mud dries on the fleece, they’ll be unable to get up and will die.  While humans can exhibit cleverness and intelligence in their inventions, they remain in need of God’s guidance.  Usually a child is born into a family with a father and mother, whose roles are essential in the child’s growth and development.  Parents play an essential role in the development of the child’s character and values, which eventually the child will pass on to his own children.

Unabashedly, Jesus underscores the religious leaders of Israel who’ve failed in their role as God’s shepherds; He points to Himself as the true Shepherd whom God sent.  In God’s estimation, more than a leader, Israel needs a shepherd – as we do.  David epitomizes such a leader; he’s sometimes called a shepherd king.  Saint Paul says there are many so-called teachers but few fathers.  John portrays Jesus as the new Moses, an Old Testament shepherd who led the children of Israel into the Promised Land though he himself was unable to enter.  He connects Jesus with the Messianic Son of David, the Shepherd who inaugurates the New Covenant for His people, who will unite Israel and the Gentiles into one flock under one Shepherd.  There’s an undertone from the writings of the prophet Ezekiel: God rebukes Israel’s false shepherds who shear and eat the sheep rather than feeding them.  The prophecy expresses God’s discontent against wicked shepherds and promises that the true Shepherd will seek those who are lost.[1]  From today’s Gospel, unlike someone who is hired, Jesus searches for the lost, even to the point of giving His life on the cross for the sheep.

Luke illustrates this through the parables of the lost sheep and the lost coin: Jesus defends His outreach to sinners, describing how God reaches out to them through His ministry.[2]  We can only speak of the patience of the shepherd who seeks the straying sheep, leaving the ninety-nine and going after the one that is lost – not because the ninety-nine aren’t important, but giving importance to the lost sheep, to find it through carefully searching.  The image of finding something or someone lost unites this parable with the resulting joy.  Why would God or Jesus go through looking for the sheep?  Because of the joy of finding them.  There’s joy in heaven when a sinner is found.

He descended to the dead

How far was God willing to seek and save the lost sheep?  The Apostles’ Creed states that Jesus “suffered under Pontius Pilate, was crucified, died and was buried.  He descended to the dead.”  The Saviour descended to the place of the dead, proclaiming the good news to the spirits imprisoned there.  If only we could understand that Jesus would go thus far for humanity!  According to the fourth-century monk and theologian Rufinus, Jesus as King proceeded to a prison, opened its doors, undid the fetters [handcuffs], broke into pieces the chains, bars and the bolts, brought forth and set at liberty the prisoners, restored those who were sitting in darkness and in the shadow of death, and gave them light and life.  Jesus died on the cross, descended to the prison and set the captives free – the lost souls of His creation.  As Rufinus describes a King who would do such a thing, the true Shepherd went thus far looking for the lost sheep.

We need Jesus as our Shepherd

What can we learn from the Gospel today?  What is God speaking to all of us?

I have a replica of Pope Francis’s crucifix: it depicts the Lord Jesus, and on His shoulders a lost sheep.  Jesus went down to the pits of hell, took every single one who was in in prison, put them on His shoulder and brought them back to God.  It reminds all bishops of what Christ has done for us: when He stretched out His arms on the cross He was looking for every single one of us, that we might find life and be brought back to God.