“Consecrate yourself, for tomorrow I will do wonders” 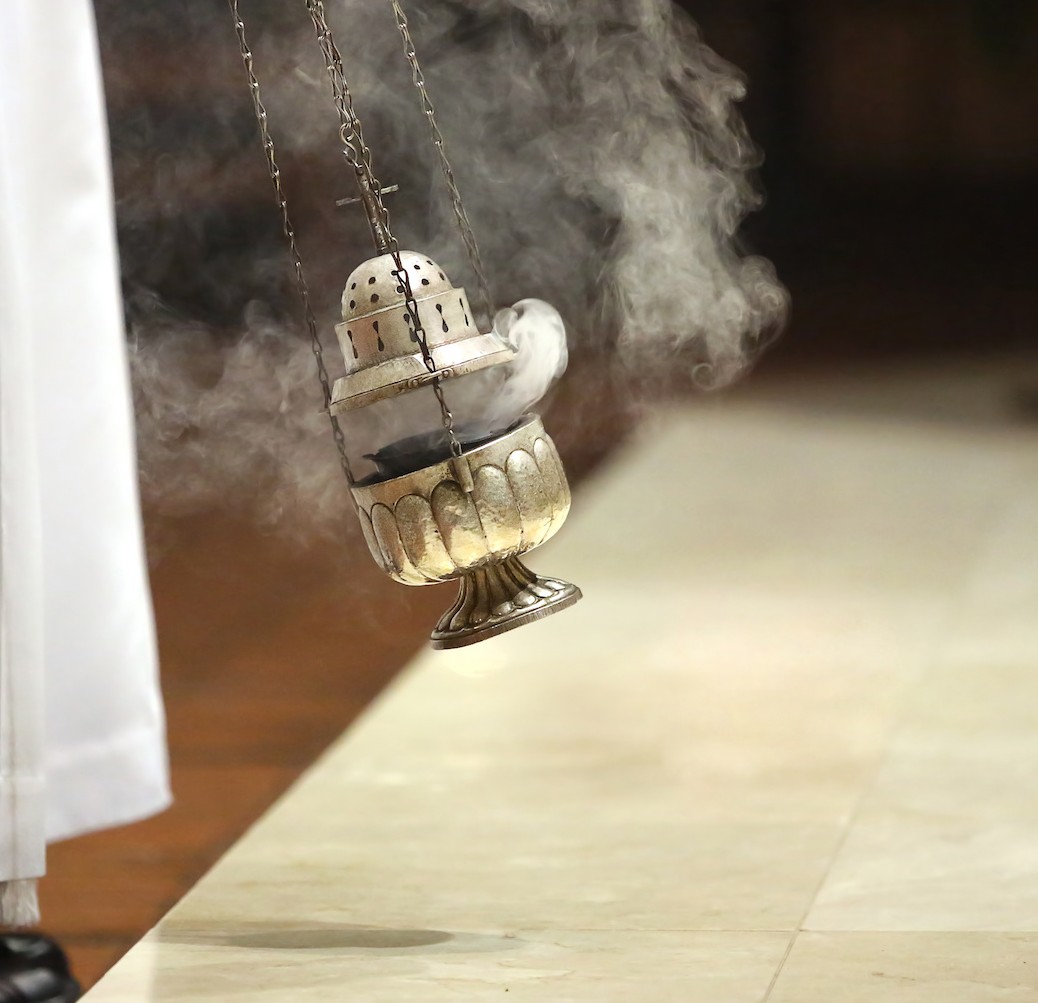 Whenever we gather as a Church, it’s not for the work of man but the work of God.  This is a month to remember as we celebrate our 25th anniversary as a diocese.  This is not about a person, but the gift of apostolic succession to our Church, since which we’ve never been the same.  It’s good to give thanks for the good things God has done.  I’d like to thank everyone who has worked hard during the pandemic to ensure we could continue to be a Church in these difficult times.  We cannot stop being who we are because of a pandemic – all the more we need to be what God wants us to be.

From the onset of Jesus’ ministry, He said, “The Kingdom of God has come”.  He also said, “You are in this world, but not of this world”.  This entails many things that guide us in how to live our lives as Christians.

In this world but not of it

Recently a volcano erupted in La Palma, Islas de Canarias.  It’s heartbreaking to see people work so hard for their livelihood and build a house, and then in minutes it’s all gone; but this is the reality of life.  We’re saddened that millions have died in the pandemic; but we shouldn’t be surprised, because Jesus said that in this world we’d have war and pestilence.  C. S. Lewis said that people who live in war cannot imagine peace, and people who live in peace cannot imagine living in war.  We like a life of convenience and cannot imagine that for some people there’s suffering.  I heard the story of a family in the Philippines who were so hungry that when they harvested sweet potatoes they ate them raw and unwashed so the soil would help fill their stomachs.  Let us never forget that many of us came from poverty.  God has blessed us tremendously because of His grace; it’s good to look back and realise where we came from so we can continue where we’re going.

We’re pilgrims in this life, but Jesus called us to be the salt and light of the world.  As Christians, knowing this, we ask ourselves how we’ll live.  Everything in this life is transitory: we’re only passing through on our way to our eternal home.  We’re not meant for earth, until things change – God has something else in store for us.  We need to see life from that standpoint.

When Jesus died on the cross, He inaugurated a new Kingdom.  The earth is passing away, but the Kingdom that is perceived by faith will not pass away.  What we’re doing today is a foretaste of that Kingdom on earth.  The Kingdom became more prominent on the Day of Pentecost through the community called the Church, hence the ministry of Christ was divided among the priesthood of believers and the ministries of deacons, priests and bishops: all are servants in God’s Kingdom.

Who would want to be a servant?  Many of you know how to serve; you’re told what to do and have little freedom.  That’s the world’s view of servanthood, but there’s a different perspective in God’s Kingdom.  The prodigal son said it best: “I’d rather be a servant in my father’s house than my own master where I am”.  We serve in God’s Kingdom not as servants per se, but we serve our Father because we’re God’s children.  There’s a difference between serving your father as a child, and serving someone else for money.  In God’s Kingdom we serve the Father in His house; and we who serve the King as sons and daughters will reign with Him forever.

Be strong and courageous

After the death of Moses, the leadership of Israel was passed on to a young man, Joshua.  Everyone must have experienced a sudden surge of energy and sense of resolve.  The long trek through the desert was over.  Joshua had been waiting many years, since he and Caleb said, “Yes, we can conquer the land”.  Ten of the scouts said no, so he had to be very patient until it became a reality. Joshua was no longer a young man; the rest of his life would be taken up by the utmost zeal in God’s purpose.  Even God’s most zealous servants are frail human beings and experience discouragement.  Three times God said to Joshua, “Be strong and very courageous”.[1]  If you’re going through a difficult time, this message is for you.  If you’re greatly affected by the pandemic, be strong and courageous.

It appears that Joshua was taken aback by the responsibility that would be placed on his shoulders: even though there’s no mention that he was discouraged, why would God say this to him three times?  When Scripture says something twice, it’s for emphasis; how much more three times!  Joshua realized the great task that was given him.  The task God has given us and called us to do can never be done by human ability – only by God’s ability.  Anything God gives us is not for us to do with our own power and strength.  If God asks you to do something that’s bigger than you, don’t be discouraged.  That’s precisely why God gives it to us, because He wants us to trust in Him to do it.  If we can do it by ourselves, we might not need God.  God literally and intentionally gives us something beyond what we can do.

When they were ready to enter the Promised Land, in front of the River Jordan, God said, “Sanctify yourself – consecrate yourself – because tomorrow I will do wonders”.[2]  Because we live in the world, there’s a time to consecrate or dedicate our lives to Him.  God is a jealous God, and He wants you.  He wants to do something in your life and your family that you cannot do yourself.  You have to consecrate yourself to God and say, “Lord, whatever You want, that’s what I’ll do”.  This is a time to sanctify ourselves.  Some of our clergy decided to re-affirm our ordination vows – to consecrate ourselves again.

The next day, the Jordan River opened.  Do you want God to do wonders in your life and your family?  Consecrate yourself to Him.  We live in this world, but we’re not it.  God is more eager to do something than you can imagine.

To consecrate oneself is to dedicate oneself for God’s Kingdom, to serve and honour Him, to live for Him and thank Him, to do what He wants us to do.

The goal is Europe

The milestone we’re celebrating is not only for Madrid or Paris, and not only the gift of apostolic succession.  Beyond the cities where we have churches now, our goal is Europe.  God brought you here for a purpose – you’re not here by accident.  You thought it was to earn money, but God has called us to bring light to this continent.   Never see yourself as ministering only to the city or country where you’re living – all our churches need to put their resources together.  We have missions in different cities and countries, but our mission is Europe.  Today God is saying, “Consecrate yourself”.  He’s doing something, but He needs you.  Really God doesn’t need us, but He wants us to be part of what He is doing.

You might have a good plan, but is it God’s plan?  If God is speaking to you, say, “Lord, I consecrate my life to You in Jesus’ name.  I want to make that commitment again.  I desire what You want for me and my family.  I want to see the wonders You promised to do on behalf of Your Church in Europe.  I want to be part of what You’re doing.”  Any call of God requires a response: “Consecrate yourself, for tomorrow I will do wonders.”

Someone recently told me she was losing her sight.  I told her there are people who have eyes to see, but don’t see God; there are people who lose their sight but can see God in their heart.  You don’t see God with these eyes but with the eyes of your heart.  If you want to see the greatness of God, consecrate yourself today.  Say, “Lord, I want to see Your goodness and greatness”.

As a Church and a diocese, we’ll do what God has called us to do.  What ordinands do is what God wants us to do.  You may be dedicated to the Lord but want to re-affirm that dedication; there may be things you didn’t do and you want to do it: it’s good to be reminded of our commitment to the Lord.

Father, look upon Your Church and Your people, that we’ll be tenacious and go where You want us to go.

I asked God, “How can we ever conquer Europe?  It’s too great a responsibility.”  He said, “Don’t worry.  Don’t you realise I’m with you?  I’m doing this on your behalf; the Holy Spirit is there.”  To conquer Europe is a big responsibility; it’s beyond us.  But never forget that God is at work in you.  It’s not you who will do it, but He’ll do it through people who’d like to go on His behalf, like Joshua.

Move, Lord, in the midst of us and speak to every single one of us.  We trust in Your Word and Your Holy Spirit, that You will do the work in our lives and our families, and the work You’ve given us to be the salt and the light of the world to this continent.  Pour Your Spirit anew upon each one of us today.  In Jesus’ name.  Amen